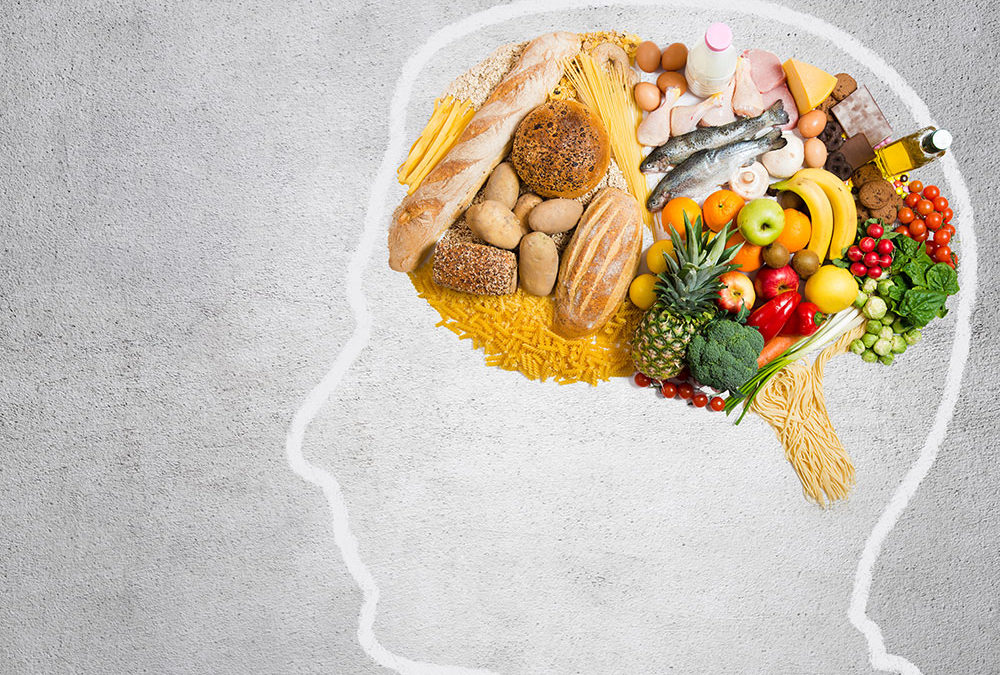 Can you eat your way to a better brain?

I often talk about the connection between the body and the mind, but what about the MIND diet?

The MIND diet is the happy hybrid of two other great diets – the Mediterranean and the DASH (Dietary Approaches to Stop Hypertension) diets. As you might have guessed, the MIND diet is heavy on vegetables and wholefoods, but it does go further to emphasise specific brain-healthy foods groups.

So far the evidence points to it assisting in slowing down age related negative effects on brain health.  This is particularly important given dementia is the second leading cause of death of women in Australia (behind heart disease).  While dementia is often thought of as a memory disorder, it’s more accurate to define it as a fatal brain failure – a terminal disease that can cause physical death.

In research studies, those who closely followed the diet had a 53% reduced risk of developing Alzheimer’s disease and a brain age 7.5 years younger than those who didn’t follow the principles.  Even those moderately following the diet benefited with a 35% reduction in Alzheimer’s risk compared with those who followed it loosely or not at all.

So what should you be eating??

Eat a rainbow across the week

No, this doesn’t mean you should only eat red things on Monday, yellow things on Wednesday, blue things on Friday and violet things on Sunday!

A central aspect of the MIND diet is its emphasis on a variety of healthy foods, as well as overall diet quality, rather than overly focusing on individual nutrients.  Aim for a wide variety of foods that includes colourful fruit, vegetables and legumes, as well as different types of wholegrain cereals, protein and plant-based oils.  If you’re comfortable with the Mediterranean diet, the MIND diet is just a few small inclusions away!

As always, green leafy vegetables are the superstars because they are nutritional goldmines. High in healthy-brain nutrients such as folate and flavonoids, as well as essential vitamins and minerals, eating several serves per day can slow your cognitive decline by as much as 11 years when compared to those who eat very little.

If you want to really nourish your brain, berries – especially blueberries – are your low sugar, high antioxidant and anti-inflammatory winners.  Blueberries in particular are rich in polyphenols, plant compounds linked with beneficial changes for ageing.  Fresh or frozen makes no difference – aim to have a serve each day.  If blueberries are not an option for you, then plums, prunes, blackcurrants and black grapes (noticing a pattern here?) are also high in polyphenols.

The fats you eat can affect brain health, given your brain is approximately 60% fat!  Eating daily serves of healthy fats, such as omega-3s found in oily fish, can help to limit inflammation and oxidation.  These are vital aspects of brain protection given oxidation plays a significant part in age-related cognitive decline.

Over two decades of research points out that Omega-3s (especially DHA) may help delay cognitive decline, including Alzheimer’s disease. Eating more fish helped in slowing down age-related memory decline with even one fish meal per week lower dementia risk, however eating fish 2-3 times per week showed even better risk reduction.

Not all fish are created equal though – the best for your brain are the ones with the highest amounts of omega-3 fats.  Aim to eat sardines, mackerel, herring, salmon, trout, tuna and calamari.

Vegetarians or vegans aren’t left out either, as linseeds, hemp seeds and chia seeds are valuable plant sources of omega-3 fats.

What else is different?

The MIND diet focuses heavily on a variety of vegetables, nuts, beans, wholegrains, poultry, olive oil and red wine (in moderation!) because of the valuable nutrients in each of them.

It’s all about balance…

While foods that nourish the brain have beneficial effects, some foods can have the opposite effect when eaten too often.   Treats can be part of your life, but they shouldn’t be the core of your diet!

A diet high in processed foods (such as biscuits, snack foods, sweets, fried foods and processed meats) and even obesity appear to be a contributing factors to the development of age-related mental impairment.  While the mechanism behind the link is still largely unknown, future research will likely focus on the impact of insulin resistance, imbalanced gut bacteria and inflammation.

If you’re already following eating patterns that minimise heart disease risk, these may also protect against dementia development, especially Alzheimer’s disease.  A good rule of thumb is if it’s good for your heart, there’s a good chance it will be good for your brain!

Want a taste of what you could be enjoying on the MIND diet?  Try these out!