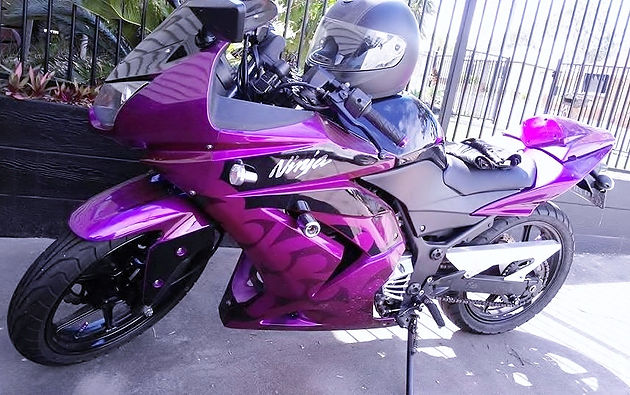 Last week I did my Level 1 Compounding course (more on that later!) and given that I needed to be on the Brisbane northside by 9am, this meant crossing from Ipswich through the city in peak hour traffic.  There’s no way I was going to do this by car (the amount of fuel and time wasted for peak hour journeys through the city with only one person in a car makes my heart ache), so I decided to take my bike….

…that I hadn’t ridden in nearly 18 months…

As a motorcyclist, there are certain challenges I’ve faced – bikes being very tall and heavy, protective clothing that doesn’t really fit properly, trying to fit glasses into helmets, but the most challenging has been balancing childbearing with riding.  Having babies has meant several breaks from riding – it’s hard to put on a helmet when morning sickness makes being upright a challenge or plopping an 8mth pregnant belly onto a bike comfortably!

With my first pregnancy I stopped riding early on and due to a difficult pregnancy and birth, I didn’t get back on the bike at all until nearly the start of my second pregnancy.  I was so fixated on my pain that I didn’t enjoy riding and used any excuse to put it off. I eventually sold that bike because it made me sad to see it sitting unused in my garage.

I ended up buying another bike.  It was smaller, lighter and an astonishing shade of purple!  After my second pregnancy I was a bit more confident about getting back on the (mechanical) horse, but I still put it off for months because I was terrified about getting through a certain turn on a particular hill.  My fear held me back so much and I knew it wasn’t rational, but when I finally took the bike out for a twilight run, I wondered what it was that had held me back?  What was all the fuss and internal noise about?  There was really nothing there.

This last pregnancy, I stopped riding at about 3mths when nausea made it almost impossible to wear a helmet, but I knew the bike wasn’t going to be neglected for long.  I had thought after a nearly 18 month break I should probably do a practice run, but I was keen and I felt more than ready.  I ran through the elements of riding and the route I would take over and over in my head in the preceding days (“Cool Runnings” came to mind!) and that morning, I pulled on my husbands Draggins (baby belly is taking a bit longer to reduce this time around…), strapped on my tiny backpack, took a deep breath and kicked into gear without a single hesitation or doubt to hold me back.  I’d done this for a decade.

I knew how to do this.

I could definitely do this.

How was it?  Is was just like riding a bike… you never really forget 😉